SMART-MR: How can the public contribute to effective traffic planning? 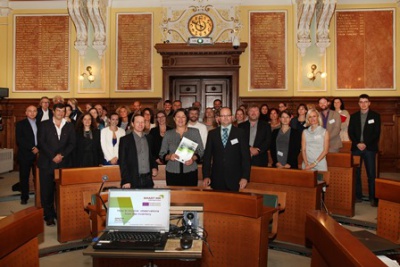 Ljubljana, SLOVENIA – The 1st workshop of the SMART-MR project: Sustainable measures for more efficient transport in metropolitan regions entitled “Participatory transport planning” co-financed by the Interreg Europe program was held on 15 and 16 September at the City Hall in Ljubljana. It was organized by ZRC SAZU (Anton Melik Geographical Institute ZRC SAZU) and the Regional Development Agency of the Ljubljana Urban Region.

The first of seven project workshops, attended by more than 50 participants from 8 metropolitan regions (Oslo – Akershus (Norway), Gothenburg (Sweden), Helsinki (Finland), Budapest (Hungary), Rome (Italy), Porto (Portugal) ), Barcelona (Spain) and Ljubljana (Slovenia)), two main topics were highlighted, namely who to include in traffic planning and how. Participants exchanged experiences and examples of practices from their metropolitan regions. Initially, the reasons for and against public involvement in transport planning, whether integration can be too much, whether public involvement slows down the planning process, who to involve, how to involve important decision-makers, vulnerable groups and who can speed up the integration process were addressed.

Participatory planning helps to improve traditional planning approaches, because with the help of early public involvement in the preparation of plans, it can be adapted to public expectations. Successful implementation of the participatory process enables the achievement of many goals: it mitigates differences between views, designs for all acceptable solutions, prevents unnecessary competition, ensures the involvement and interest of local actors and increases their identification with decisions. Participation also has disadvantages, especially its duration and (financial) complexity. It is also not enough to merely involve the public in discussions, but stakeholder initiatives need to be incorporated into the plan and its implementation as much as possible.

Representatives of Oslo Reidun Stubbe and Akershus Liv Maren Bjørnstad described how they introduced a traffic tax in Oslo for all those who drove to the city only for work and lived in the Akershus district surrounding Oslo. The original aim of the transport fee was to raise funds to finance the motorway network in the region, and 20% of the funds raised were invested in public transport infrastructure. In the second phase (2001), most of the funds were invested in public transport; with the third phase (2008), they financed both investments in motorways and public transport. With thoughtful public involvement and political consensus, they managed to enforce the measure, which seemed doomed in advance, and since then the funds they raise have been shared between Oslo and Akershus by agreement. The funds raised were used to build a modern and efficient transport system, reduce congestion in the city center, and increase the use of electric vehicles (fees are exempt) (

In Gothenburg, they did not do so well. Their poor practice of not involving the public was presented by Per Kristersson. Due to the lack of public involvement in the initial period of implementation of the concentration tax in the city of Gothenburg, there was resistance. After lengthy negotiations at local, regional and national levels, a compromise has been reached in such a way that condensing tax payments are justified to local residents near the point of payment who pass through it after daily tasks.

Representatives of Rome Francesco Filippi, Helsinki Mette Granberg and Porta Avelino Oliveira presented their innovative tools for participation. Participants were particularly interested in experiences in the implementation of the participatory process, such as: what knowledge is needed for this, how to most effectively involve the public and, above all, how to include their proposals in the planning.

As part of the workshop, the participants also had a study tour of the center of Ljubljana (Site visit), where they learned about traffic policy, the process of restricting motor traffic in the city center and one of the main traffic arteries in the city center – Slovenska cesta, with the reconstruction of Eipprova Street. are the Bicikej self-service bicycle rental system, the free Kavalirji electric vehicles and the car sharing system, and then they took a city bus to visit the P + R Dolgi most car park.

Those present were greeted by the project manager dr. Janez Nared, Anton Melik Geographical Institute ZRC SAZU, mag. Matej Gojčič, RDA LUR, mag. Polona Demšar Mitrovič, the Ministry of Infrastructure and Zoran Janković, Mayor of the City of Ljubljana, who pointed out that cities that are committed to sustainable mobility have a noticeable economic advantage.

On Friday, 16 September, the European Commissioner for Transport Violeta Bulc also paid a visit to the participants and expressed her enthusiasm for new and innovative approaches to transport planning. She emphasized that European cities around the world were achieving excellent results in pursuing more humane and environmentally friendly modes of mobility.

The SMART-MR project deals with the problems and challenges of traffic management in metropolitan regions, which causes congestion and large amounts of greenhouse gases, and thus imposes great challenges on the authorities in providing healthy living conditions for the population and a supportive environment for economic development. Thus, the main objective of the SMART-MR project is to support local and regional authorities in improving transport policy and ensuring sustainable measures to achieve flexible low-carbon mobility in metropolitan regions.

You can read more about the SMART-MR project at http://www.interregeurope.eu/smart-mr/.