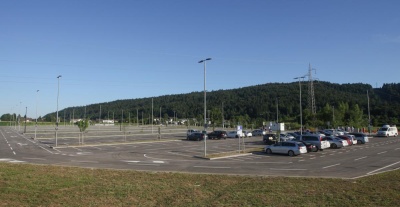 The new Stanežiče P+R car park has opened next to Celovška Cesta. It is the sixth car park of this kind in Ljubljana and the tenth in the Ljubljana Urban region.

The car park has 392 parking spaces, of which 20 are reserved for disabled drivers, while six are for parking and charging electric vehicles. There are also 15 parking spaces for campers, four bus stops and two tourist bus stops. Cyclists can make use of 20 bicycle stands holding 40 bicycles and 16 bicycle storage lockers.

The Stanežiče P+R car park has been built as part of the study Park and Ride for sustainable mobility in the Ljubljana Urban Region and is part of the park and ride (P+R) network that is slowly being completed in accordance with the study. Construction of the P+R network and other intermodal interchange points is also one of the key measures of the Integrated Transport Strategy of the Ljubljana Urban Region. Further P+R hubs are currently under construction in Grosuplje, Borovnica and Kamnik.

The investment has been co-financed by the Republic of Slovenia and the European Union’s Cohesion Fund.