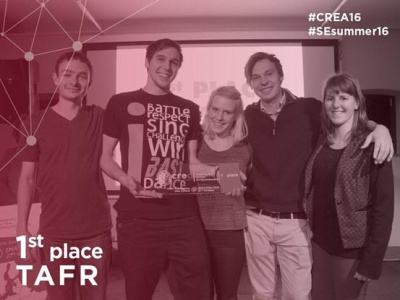 The CREA ICT Business Idea Contest took place in Milan at the end of October 2016, as part of SMAU, Italy’s largest ICT trade fair, and attracted 14 of the best start-up teams from seven countries. The team from Slovenia, TAFR, which had enhanced its innovative idea at the CREA Summer Academy “Green Future”, scored a convincing victory.

The Regional Development Agency of the Ljubljana Urban Region and the University of Ljubljana Faculty of Computer and Information Science organised a second CREA Summer Academy in Ljubljana, the European Green Capital 2016, in July this year. Guided by experienced mentors, participants were given the opportunity to learn about creative approaches to the planning of services and products and test and perfect their own business ideas in interdisciplinary teams.

Under the slogan “Creativity and ICT for a new Entrepreneurship”, CREA Summer Academies took place in seven partner countries (besides Slovenia these were Estonia, Greece, Italy, the United Kingdom, Germany and the Netherlands) and were attended by more than 300 promising young students and future entrepreneurs. The winning teams from all the Summer Academies took part in the international “CREA ICT Business Idea Contest”. Slovenia was represented by the aMediMat group with an innovative patch for treating chronic skin wounds using stem cells, and the TAFR group with a robot that uses computer vision to move autonomously through a vineyard and assess the state of vines, additionally fertilising and protecting them if necessary. The latter impressed the 14-member international judging panel consisting of investors and representatives of support environments with its comprehensive presentation and innovative idea. The top three teams were awarded the opportunity to incubate their ideas in one of three European business incubators: PoliHub in Milan, Tallinn Business Incubator in Tallinn and Crosspring in Zoetermeer (Netherlands).

Once again this year one of the core aims of the CREA Summer Academy was the forging of interdisciplinary ties within start-up teams, which again proved to be the right direction. According to TAFR team member Janez Cimerman, it was this that made a significant contribution to the rapid and successful development of their idea. Speaking at the award ceremony, Cimerman said: “We came to the CREA Summer Academy with an already developed idea, which however turned out to be incomplete from the business point of view. With the help of the mentors, new team members from different fields and other participants, we drastically improved our original business model. We also gained more motivation and new ideas which we aim to build into our prototype as soon as we can.”

The event was also attended by Tina Pezdirc Nograšek, the project manager at RRA LUR, who welcomed this new victory by a team from Slovenia and emphasised that success in such a broad international competition is simultaneously confirmation that the CREA Summer Academy in Ljubljana provided a high-quality programme, top-quality mentors and excellent organisation: “We Slovenes have once again proved that we are capable of creating comprehensive formulas for the success of Slovene start-up teams at the international level. As an educational and experimental platform, the CREA Summer Academy represents an environment that addresses new challenges in the development of start-up companies and entrepreneurial training and goes on to facilitate the integration of new approaches into education programmes.”