A remarkable achievement for science and nature conservation – the successful reintroduction of the false ringlet, one of the most endangered species of butterfly in Europe 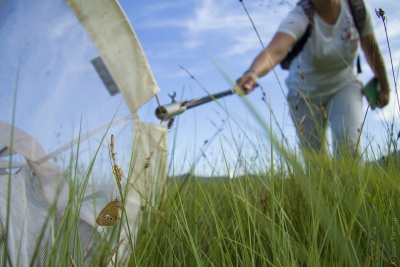 As part of the PoLJUBA project, the main objective of which is the restoration and conservation of wet meadows within the area of the Ljubljana Marsh Nature Park, Dr Tatjana Čelik of the ZRC SAZU Jovan Hadži Institute of Biology, has accomplished something remarkable – the successful breeding and transfer of more than 120 specimens of false ringlet butterfly to the Iški Morost Nature Reserve, where the species has not been seen for the last ten years. The activities of the PoLJUBA project are focused on improving conditions for numerous endangered animal and plant species tied to this habitat. For the most part these activities involve direct nature conservation measures and the purchase of key sites, since this is the basis for creating conditions for the conservation of disappearing indigenous species.

As part of the project activities, the false ringlet butterfly, one of the fifteen most endangered diurnal butterfly species in Europe, was recently reintroduced to the Iški Morost Nature Reserve a decade after its local extinction.  Until 1990 the species was found scattered across the entire Ljubljana Marsh area, while since 2001 it has only been found in the south-eastern part of the area. Over the last 18 years the habitat of the false ringlet has been reduced by 92%, while overall numbers have fallen by 75%.  This population, the last in central Slovenia, is estimated to number between 400 and 500 specimens. The intensification of agriculture is the principal reason for the reduction in the distribution of species and the extinction of populations in the Ljubljana Marsh area over the last two decades.

In order to prevent the extinction of the species in central Slovenia, a breeding programme was begun in 2019 as part of the above project, with the aim of reintroducing the species in the Ljubljana Marsh area and strengthening the population. At the same time the Ljubljana Marsh Nature Park took over the management of certain key areas, in which conditions for the survival of the species are being improved through suitable stewardship (including spatial and seasonal adaptation of the mowing regime and the removal of woody overgrowth).

Butterfly expert Dr Tatjana Čelik began the reintroduction process last June. First she took six female specimens of false ringlet from the wild. These laid their eggs in specially adapted insectariums at the Barje Research Station. Dr Čelik monitored the development of the caterpillars and ensured optimal conditions. Between mid-May and June the caterpillars pupated, after which the chrysalises were taken out into the natural environment. Twenty were returned to the original population and the remaining 154 were placed in the area of the Iški Morost Nature Reserve, where the species had been locally extinct for a decade but where the grassland was now suitable for its survival. At the time of writing, the last butterflies are emerging from their chrysalises.

The second stage of reintroduction will take place next year. The plan is to introduce at least 240 chrysalises, both to establish a new local population in the Iški Morost Nature Reserve and to strengthen the original population between Ig and Škofljica.

Commenting on this remarkable achievement, Janez Kastelic, the director of the Ljubljana Marsh Nature Park, said that it could not have been achieved without the excellent cooperation of all key stakeholders at both the local and national level. Without the constructive cooperation of farmers, landowners, municipalities and the Ministry of the Environment and Spatial Planning, not to mention the financial support from the European Regional Development Fund and the Republic of Slovenia, such results would probably have been impossible to achieve in such a short time.