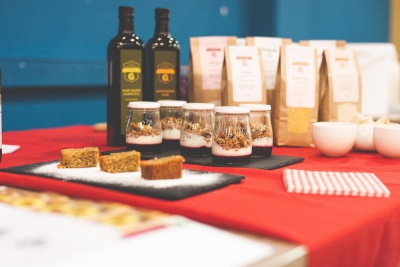 On Tuesday, 21 May 2019 around 70 local food producers, hotel and restaurant owners and representatives of primary schools, nursery schools and other public institutions in the Ljubljana Urban Region gathered at the business incubator ABC HUB in Ljubljana’s BTC City to discover the latest local food offerings, conclude deals and jointly plan food production and processing for the future.

The number of participants is increasing every year and this year suppliers of vegetables, fruit, cereals and cereal products, honey and dairy products were joined by suppliers of meat and meat products. The good work of the organisers has also been confirmed by a national Moving Forward award in 2018 and a prestigious international award for best sustainable practice in the cities category presented at ITB Berlin by Green Destinations.

The Locally Grown Food Exchange, which is among the most successful measures for the promotion of local self-sufficiency and short supply chains in the Ljubljana Urban Region, took place this year at the ABC HUB business incubator. This proved to be an extremely suitable venue for the creation of a positive business environment for local food suppliers, hotel and restaurant owners and public institutions. The promoters and organisers of the event – City of Ljubljana, Regional Development Agency of the Ljubljana Urban Region, Ljubljana Tourism, Chamber of Agriculture and Forestry, Ljubljana Agriculture and Forestry Institute and EKOmeter – are extremely satisfied with the results of the first two Exchanges, on the basis of which a number of cooperation agreements have been concluded and the first steps have been taken towards planned production and processing. At the same time the percentage of locally produced food offered by Ljubljana’s restaurants, hotels and public institutions has increased. This trend is expected to continue in the future.

The main purpose of the Exchange, which takes place in the form of meetings between suppliers and buyers, remains that of promoting short supply chains, which can be achieved by establishing as many contacts as possible and exchanging information on supply and demand with regard to locally produced food. Schools and nurseries were once again able to verify the possibilities of buying local food both through tendering procedures and outside them, and conclude agreements to purchase locally produced food as part of the schools scheme, the Traditional Slovene Breakfast initiative, and so on. Ljubljana Tourism is working hard to link local suppliers with catering establishments and hotel restaurants, since more and more tourists today are interested in visiting responsible destinations that can offer them genuine and authentic experiences. Meals made with local, seasonal ingredients are also of better quality and more environmentally and society friendly. A growing number of establishments offer the Ljubljana Breakfast, which is a direct product of the Green Supply Chains initiative, while a new experience consisting of a guided tour of Ljubljana’s central market complete with breakfast is expected to be available by the summer.

This edition of the Locally Grown Food Exchange was also attended by cookbook author Valentina Smej Novak, who introduced Ljubljana Tourism’s new Culinary Calendar initiative. Each month catering establishments are sent three recipes that include seasonal and locally grown vegetables or fruit. The fruit or vegetable of the month is determined in conjunction with local producers and suppliers at Ljubljana’s central market.

Among the regular attendees of the Exchange who uses local ingredients in the kitchen is Jorg Zupan, the owner and chef of the Atelje restaurant. He emphasised that personal contact with local suppliers is extremely important, since in this way they are able to exchange opinions and, above all, knowledge. On the basis of good dialogue, suppliers can for example opt to grow a different type of vegetable or fruit.

Tomaž Habjan of organic farms partnership “Partnerstvo ekološka Kranjska” (Piktom d.o.o.) was also present. The farms that make up this partnership supply everything from fruit and vegetables to cereals, jams, milled products, etc., throughout the year.  They see the main advantage of the Exchange in the fact that it is an opportunity to connect with buyers and listen to their actual needs. At the same time they emphasise that the systemic support through which public institutions are able to order up to 20% of products outside the scope of public procurement contracts is more than welcome, although they would like to see this percentage increase in the future.

Vesna Kosmač, who is responsible for organising food at Šentvid Nursery School, explained that her nursery already buys strawberries from Janče (a settlement to the east of Ljubljana) and local milled products. She sees the biggest added value of the Exchange in the fact that she was able to obtain the contact details of all suppliers in one place. She also welcomes information on the quantities of products available from individual suppliers and seasonal availability.

The fact that the Locally Grown Food Exchange is on the right track is confirmed by two awards: the 2018 Moving Forward award for the biggest improvement in the public sector (awarded by the University of Ljubljana Faculty of Administration) and an international award for best sustainable practice in the cities category from Green Destinations, awarded at ITB Berlin, one of the most important tourism trade fairs in the world.

As well as organising workshops for cooks from schools and nurseries, supporting public institutions in the preparation of public procurement contracts and working with Ljubljana’s hotels and restaurants, the Exchange contributes to the sustainable development of the city both in terms of the economy and environmental impact and with regard to social relations. Local self-sufficiency is a priority topic at all levels of sustainable development in Ljubljana, so the City of Ljubljana has included it as a key focus in the strategic objectives of its vision of Ljubljana up to the year 2025. It has also produced two important documents – the Environmental Protection Programme and the Rural Development Strategy – which follow these objectives.

The Locally Grown Food Exchange took place this year in the context of a European project called ROBUST (Rural-Urban Outlooks: Unlocking Synergies), which deals with strengthening relations between urban and rural areas and is financed under the Horizon 2020 programme. The project is running under the aegis of the Regional Development Agency of the Ljubljana Urban Region, which connects together 26 municipalities and directs all its activities towards the sustainable development of the region as a whole, where the promotion of local food production and processing is one of the key pillars of its work.