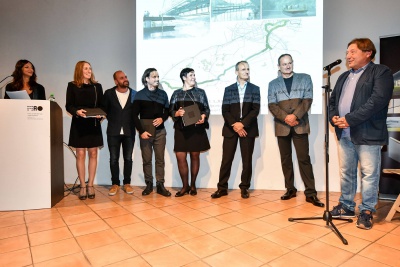 The Golden Pencil awards recognise the most notable achievements in the fields of architecture, landscape architecture and spatial planning. The main purpose of the awards is to promote good-quality architecture and arrangements of open space to the general public and to raise awareness of the cultural and creative dimensions of design and spatial planning. Awards go to projects that represent a high-quality contribution to constructing the local environment.

The potentials of the Ljubljanica were recognised in 2011 by the City of Ljubljana and the municipalities of Vrhnika, Borovnica and Brezovica, which under the aegis of RRA LUR joined together in a joint project to prepare a plan to regulate the navigable channel and quays from Vrhnika to the Moste sluice gate. Their ambitious plans, which included a comprehensive system for the regulation of navigation along the river Ljubljanica, the navigable channel, structures destined for the navigable channel and its maintenance, markings for major junctions and their regulation, were successfully incorporated into the study – a document that will represent the basis for all subsequent projects – by a large team of experts from the fields of architecture, landscape architecture, civil engineering and biology.

As noted by the international judging panel, consisting of spatial planning experts, the river Ljubljanica plays a significant part in defining the wider Ljubljana area. In order to preserve this historic role it is important both to transcend the boundaries of the city and to understand the river as the backbone of the area. The multi-layered treatment of the river is based on the principles of integrated planning, where the interdisciplinary nature of the team and their approach to work allows the study to give equal weight to all three pillars of sustainable development – spatial planning/environment, society and economy – and address them holistically and systematically. Society is taken into account by harmonising the various interests of different types of users and through the translation of statutory and safety requirements or restrictions. The economic aspect is considered through verification of the financial aspect and development opportunities. The environment is treated from the point of view of nature conservation priorities and restrictions. The spatial planning element, taking into account all the characteristics and limitations listed, is also studied from the point of view of the recreational and tourism-oriented use of the space on and along the river. Different types of content important for the navigability of the river are arranged at discreet intervals along its entire course from Marolt’s Spring in Vrhnika to Ambrož Square in Ljubljana: a marina with accompanying facilities and connections for pedestrians and cyclists along the river and over it (footpath below the existing railway bridge, raft for crossing the river, boat moorings). In this way the study maintains and builds on existing and new uses along the river and in its environment, facilitating development while also ensuring that existing advantages are preserved. The study thus represents a good basis for further spatial planning.