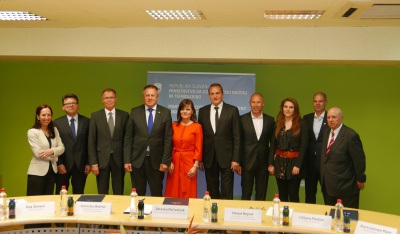 “Regional Development Agreements are a new instrument of regional policy, so the signing of the first agreements is all the more significant for us,” said Mr Počivalšek. “During preparation of the agreements it became apparent that they represent a major challenge for our ministry and for the government as a whole, and probably also represent a unique challenge in the regions.” In order for today’s signing to take place, three key steps have had to be taken in the last two years. First, to supplement the legal basis and establish the mechanisms envisaged by the law, both at the regional level and at the national level. Secondly, to harmonise the proposals of the regions and the state through territorial development dialogue. And thirdly, to provide funds within the budgets of all competent ministries, which means that we have had to harmonise the development goals of the regions with the aims of sectoral policies.

With the signing of today’s agreement, the Gorenjska region has obtained support for four projects with a total value of around €28 million. Just over €11 million of funding will come from the Ministry of the Environment and Spatial Planning, the Ministry of Infrastructure and the Ministry of Labour, Family, Social Affairs and Equal Opportunities, while the remainder comes from municipalities and other sources. Under the agreement, the funds will be used to regulate the collection and treatment of urban waste waters in the Upper Sava basin and the area of the Kranjsko-Sorško Polje, create a cycle route linking Jesenice, Lesce and Bled, create a residential unit for the elderly and support the regional scholarship scheme. The Development Agreement for the Central Slovenia region currently only contains one project for the collection and drainage of waste waters in the basin of the Ljubljanica, with a value of €17.8 million, of which the Ministry of the Environment and Spatial Planning will provide €9 million, while the remainder will come from municipal funds and other sources of financing.

Ministries are conducting territorial dialogue with all regions and agreements will shortly be signed with a further nine regions. A total of 29 projects with a total value of slightly over €101 million will be supported. “We are aware that needs within regions significantly exceed funding possibilities and we will therefore continue territorial dialogue after signing all the planned agreements. The agreements themselves will be supplemented with new projects when this is possible,” Mr Počivalšek explained, adding that “to this end the Government has already allocated additional spending rights under the Operational Programme for European Cohesion Policy and a second invitation to regions to submit project proposals, which is expected to remain open for two months, is planned to be published in the second week of November. This time around €430 million will be available for the implementation of regional projects: €297 million for the Eastern Slovenia cohesion region and €133 million for the Western Slovenia cohesion region.”