A new space for (co-)working, meeting, retreating and connecting 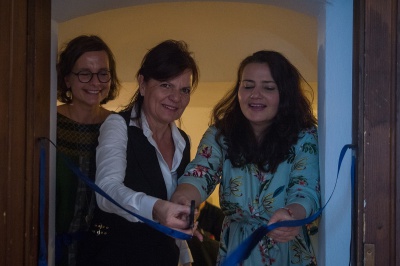 The Writers’ Hub – a new space for (co-)working, meeting, retreating and connecting – opened its doors on 25 October 2018. The shared space is available to anyone who needs a quiet corner and a computer in order to write.

RRA LUR obtained funding from the Forget Heritage project for the partial renovation of the space and the implementation of a one-year writing support programme (workshops, mentoring programme and various presentation events for programme participants). In the first year of activity of the Writers’ Hub, the programme is aimed at young people aged between 15 and 29.

The launch event began with an introductory greeting from Tina Popovič, the director of Divja Misel (the organisation that manages the Vodnik House complex, where the Writers’ Hub is based), who described the whole journey of the Writers’ Hub from idea to realisation as a co-working space. She also spoke briefly about the three-year support programme, with an emphasis on the first year, in which activities are co-financed by the Forget Heritage project.

RRA LUR director Lilijana Madjar provided an introduction to the Forget Heritage project and talked about the pilot projects taking place in eight central European cities. She emphasised the good cooperation between RRA LUR, the City of Ljubljana and Divja Misel. Since the establishment of the Writers’ Hub has so far been very successful, it could serve as an example of good practice for other heritage buildings in the Ljubljana Urban Region, particularly since the birthplaces of more than 30 Slovene poets and/or writers are located in the region.

Those attending the opening event were welcomed on behalf of the City of Ljubljana by Mateja Demšič, the head of the Culture Department. She emphasised the important role that books play in Ljubljana – a UNESCO City of Literature – particularly for young people, and the role of professional non-governmental organisations, which work extremely well. Divja Misel is a good example of the latter. She ended her address with the following words: “The Writers’ Hub should not only be a place for literary creation, but above all a place of literary power, that through its content can change reality.”

The event also included an opportunity to hear Slovene translations of a short prose text translated from English by the participants in a translation workshop led by Petra Meterc, which introduced would-be translators to some of the difficulties of translating literature and looked at various approaches to it.

Presentation of the results of the first workshops

The first two workshops, both of them dedicated to supporting the creativity of young people in the broader sphere of literature, took place between 20 and 31 August. The third workshop, “Writing texts for music”, is taking place now. At the opening event two participants, Matevž and Lara, read extracts from their texts. Together with the other workshop participants, they sought inspiration in non-dramatic literary works and tried to draw their own dramatic expression from them under the expert guidance of directors Žiga Divjak and Katarina Morano in the course of the workshop “Between literature and theatre”.

The reading of the texts was followed by a brief discussion with one of the Writers’ Hub’s first resident writers, Petra Meterc, and the co-coordinator of the Writers’ Hub programmes, Nika Kovač. Since Petra had also acted as the mentor of the participants in the translation workshop, she shared her mentoring experiences. She was very happy to have had the opportunity to share her knowledge and experience with young women who were not students of English literature but were simply interested in literature and keen to familiarise themselves with the basics of translation. The participants did not only come from Ljubljana, but also from other parts of the Ljubljana Urban Region. Petra said that she had had good experiences as a “resident” of the Writers’ Hub, which she described as a pleasant place in which to write and a tranquil place in which to create, while at the same time offering the opportunity to meet new people. As a self-employed individual in the cultural sphere, she believes it is important to be able to separate your workplace from your living environment. In most cases people in her situation do not have this good fortune.

Visit to the Writers’ Hub

The event also included the opportunity to listen to Slovene translations of a short prose text translated from English by the participants in a translation workshop led by Petra Meterc, which introduced would-be translators to some of the difficulties of translating literature and looked at various approaches to it. They were also able to get a glimpse of the atmosphere at workshops, thanks to an exhibition of photographs by young award-winning photographer Jošt Franko.

Now in its third year, the Forget Heritage protect is taking place in seven central European countries in which it aims to encourage ten partners to revitalise/reuse heritage sites with content from the fields of the cultural and creative industries. The management models of these sites envisage the cooperation of the public and private sectors and encourage various communities – from local inhabitants to various creative and lifestyle communities – to participate actively and form connections.

The two Slovene partners in the project – the Institute of Economic Research (IER) and the Regional Development Agency of the Ljubljana Urban Region (RRA LUR) – participated in the drafting of the following important documents for the successful management of heritage sites: Policy Handbook for the Revitalisation of Ghost Buildings in Central European Cities; Guidelines for Involving Citizens in the Valorisation of Heritage Sites; and Management Manual for Heritage Sites.

A series of training sessions on the successful management of heritage sites, organised by RRA LUR and IER in conjunction with Culturemaker and the International Centre of Graphic Arts, took place in June 2018. These training sessions were aimed at municipalities (as the owners of sites), managers of sites from the cultural and creative sectors and the managers of the Writers’ Hub pilot project.

Since June 2018 project partners in eight central European cities (besides Ljubljana these include Genoa and Milan (Italy), Nuremberg (Germany), Bydgoszcz and Warsaw (Poland), Rijeka (Croatia) and Ústí nad Labem (Czech Republic)) have been testing and evaluating various aspects of the Management Manual for Heritage Sites. On the basis of the results and the experience obtained, a strategy for the management of cultural heritage with the help of the cultural and creative industries will be prepared over the course of next year.

1) On the Forget Heritage project and the Writers’ Hub pilot project:

2) On the Vodnik House complex and the creation of the Writers’ Hub: