State of Yucatán hosts representatives of the Ljubljana Urban Region 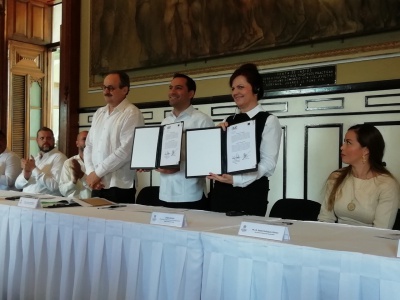 As part of a European project establishing cooperation between regions of Latin America with EU regions (the International Urban Cooperation programme), a delegation from the Ljubljana Urban Region visited the state of Yucatán in Mexico from 13 to 20 January 2019.

The partnership of the European Union with Latin America is based on close historical and cultural ties, extensive interactions between people and strong and growing trade and investment flows. In the past and present financial perspectives, European regional cooperation programmes have become a fundamental instrument for strengthening the strategic partnership between Latin America and the European Union. On the basis of the Regional Strategic Programme for Latin America, the EU will set aside €925 million for four priority areas (Links between security and development; Good governance, responsibility and social equality; Inclusive and sustainable growth for human development; Environmental sustainability and climate change).

In autumn 2018 the Ljubljana Urban Region successfully joined one of the first projects establishing cooperation with the regions of Latin America and taking place as part of the International Urban Cooperation (IUC) programme. The programme, which is based on three pillars (1. Cooperation of cities for sustainable urban development, 2. Subnational activities in the context of the Global Covenant of Mayors, and 3. Interregional cooperation for local and regional development in the field of innovations), supports the achievement of the aims of bilateral policies, with an emphasis on concluding important international agreements on urban development and climate change.

As part of the project, a visit by a four-member delegation of representatives of the Ljubljana Urban Region to the state of Yucatán in Mexico took place in January. The visit was organised by the Regional Development Agency of the Ljubljana Urban Region (RRA LUR) in conjunction with the European Commission within the context of the International Urban Cooperation programme.

During the visit, the LUR representatives met senior representatives of the state of Yucatán in the state capital Mérida and viewed examples of good practices in the field of sustainable mobility, waste management and sustainable tourism. They also visited a science and technology park dedicated to promoting the development of innovations in various fields. After viewing good practices in individual identified fields, they took part in meetings designed to compare experiences, exchange knowledge and identify common opportunities for cooperation. They also attended an event in Mérida at which the mayors of six municipalities of the state of Yucatán formally signed the Covenant of Mayors for Climate and Energy. Ljubljana, which plays an active role in mitigating climate change and creating a socially and economically stable environment for present and future generations, became one of the first cities in Slovenia to sign the Covenant in 2009. During the event, the Governor of the State of Yucatán, Mauricio Vila Dosal, and RRA LUR director Lilijana Madjar signed an Interregional Cooperation Agreement based on shared challenges and opportunities identified during the course of the visit. EU Ambassador to Mexico and Head of Delegation Klaus Rudischhauser was a special guest at the event. In talks with the representatives of RRA LUR, he proposed that Slovenia establish its own representation to support businesses entering the Mexican market, and offered his assistance in the intervening period.

At the end of the visit the members of the Slovene delegation and representatives of the state of Yucatán laid down guidelines for further cooperation and the preparation of projects and set goals for the future working visit to the Ljubljana Urban Region that is expected to take place in early April 2019.