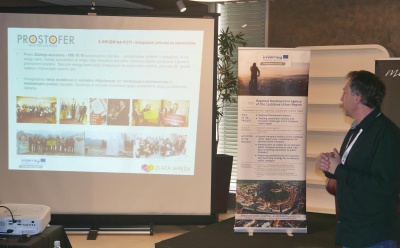 A conference on the topic of on-demand transport, organised by RRA LUR, took place on Tuesday, 23 October 2018 at Maxi Klub in Ljubljana. The purpose of the conference was to present existing practices in Slovenia and abroad and to discuss the wishes and aims of representatives of municipalities and the pros and cons of various models of on-demand transport.

The Peripheral Access project (in the context of which the conference was organised) is focused on improving the accessibility of rural areas, peripheral areas of cities and border regions, all of which are characterised by dispersed and scarce populations and face challenges such as poor public transport connections, small budgets, demographic changes (ageing population, depopulation) and high levels of private car use.

The Prostofer service (whose name combines the Slovene words for “voluntary” and “chauffeur”) was presented by Miha Bogataj of social inclusion initiative Zlata Mreža. Prostofer is a free service for elderly citizens who need transport but cannot or do not wish to burden their relatives and are unwilling or unable to pay for transport. The drivers are still-active older drivers who enjoy helping others using their own cars.

The Sopotniki service (literally: “fellow travellers”), which was presented by Marko Zevnik, is another example of an increasingly widespread form of on-demand transport. Transport is provided by younger volunteers who, through a form of intergenerational cooperation, help rescue older citizens from isolation and loneliness, particularly in more remote areas where because of distance, the lack of a car or poor transport connections, they practically never leave home.

Gregor Cunder presented two forms of on-demand transport offered by Ljubljana public transport operator LPP. The on-demand e-urban electric vehicle service is operating on a trial basis on bus route number 23 from Podutik to Kamna Gorica according to a predetermined timetable but only if someone books a ride. A Transport on-call service for persons with disabilities is available on all LPP lines. The passenger informs the driver that they wish to travel on a specific line at a certain time and is assisted in getting onto and off the bus.

In the concept of mobility as a service (MaaS), which is increasingly establishing itself as a consequence of the use of smart technologies and sharing trends, traffic modelling plays an important role. This was presented by Appia, a company that provides software and modelling for this field.

Next came a presentation of the Gustmobil service from the Graz area in Austria, which operates at the regional level as a complement to existing public transport and brings together various transport providers, including local taxi drivers.

The second part of the conference was dedicated to a discussion of the aims and interests of municipalities, their experiences of on-demand transport and the characteristics of successful and less successful practices. Various models were discussed:

These models have been designed with regard to the degree of flexibility of the service and with regard to whether the emphasis is on the social component or on strengthening the role of public transport. The largest number of participants saw a long-term solution in the second model. Towards the end of the conference, the roles of various stakeholders in establishing models of this type were illustrated.

The first conference on the topic of on-demand transport shed light on the situation in the region and serves as a basis for further activities. We hope to see more examples of the implementation of services of this type in the future, on the basis of which we would be able to formulate a model covering the entire region. To this end it would be useful to establish a dialogue with other regions and ministries. In this way we would reduce private car use and facilitate access to services for all groups of the population.