Numerous opportunities for cooperation between Yucatán and the Ljubljana Urban Region 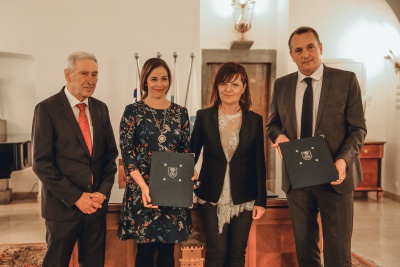 As part of a European project establishing cooperation between regions of Latin America with EU regions (the International Urban Cooperation programme), the Ljubljana Urban Region has received a visit from a delegation of senior representatives of the Mexican state of Yucatán. Opportunities for cooperation and the transfer of good practices are apparent above all in the sustainable mobility and waste management sectors. The two regions also identified great potential for an exchange of expertise on the inclusion of the 17 goals of the 2030 Agenda for Sustainable Development in strategic documents and on their implementation.

During the course of the intensive one-week visit, the delegation familiarised itself in detail with the system of establishing sustainable mobility in Ljubljana, with an emphasis on strategic urban planning, and with its development and concrete measures. Accompanied by deputy mayor Janez Koželj, the members of the delegation walked through the city centre, which is closed to motorised traffic, and viewed the arrangements of the Petkovšek Embankment and Slovenska Cesta. They also showed great interest in Kavalir, BicikeLJ, P+R, Avant2Go (electric car sharing system), yellow lanes for LPP buses and the extension of bus routes into suburban municipalities.

The delegation also met representatives of the Government Office for Cohesion Policy, where they were informed about preparations for the Slovenian Development Strategy 2030. They were received by Eva Štravs Podlogar, State Secretary at the Ministry of Economic Development and Technology, who presented the document Sustainable Growth Strategy for Slovenian Tourism and introduced Slovenia as a green, boutique tourist destination. The members of the delegation were given the opportunity to experience the latter while viewing sustainable tourism practices,  with visits to Postojna Cave, Piran, the Sečovlje saltworks, Bled and Radovljica.

The formal, ceremonial part of the visit took place at the Town Hall, where the delegation was received and welcomed by deputy mayor Aleš Čerin. The principal purpose of the working visit was a long-term partnership agreement for the purposes of cooperation and fostering new business opportunities between the two regions. The agreement was signed by the head of the LUR Development Council, Metod Ropret, and Yucatán’s Minister for Sustainable Development, Sayda Melina Rodríguez Gómez. The two regions have set themselves concrete goals, which it will be possible to realise through mutual cooperation, connections and exchange of knowledge. In the field of waste management, a waste management action plan for Yucatán will be created with the support of experts from Slovenia, while on the other hand representatives of the Yucatán state government will share their experiences of including sustainable goals in development documents with representatives of the Ljubljana Urban Region. Cooperation between the regions will also take place in the field of research and innovation, via the Centro de Innovación Tecnológica of the Centro de Investigación Científica de Yucatán (CICY) in Mexico and the InnoRenew Centre of Excellence (CoE) in Slovenia.

The cooperation project is taking place under the aegis of the Regional Development Agency of the Ljubljana Urban Region and, as director Lilijana Madjar put it in her closing remarks, we can note with satisfaction that despite the numerous differences between them, the two regions have found many shared challenges. Above all, they agree that in the planning and realisation of development it is necessary to implement the goals contained in the 2030 Agenda for Sustainable Development, which have become a new universal standard. She also emphasised our commitment to sustainable development, which must be economically effective, socially just and environmentally friendly.