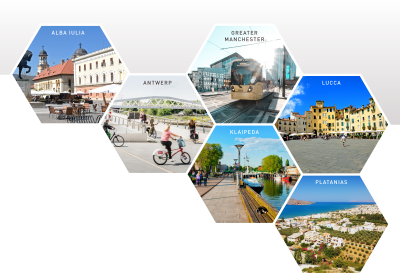 The Regional development agency of Ljubljana urban region has attended the first meeting of the SUMP-PLUS project, which took place via ZOOM. The meeting was held on the 2nd of March and was organized by the leading partner – ICLEI. In addition to the Ljubljana urban region, 17 other European cities / regions participated in the meeting.

At the meeting, the partners met six city labs in which the project will try to achieve the key objectives set in the project: Klaipeda (Lithuania), Greater Manchester (Great Britain), Alba Iulia (Romania), Platanias (Greece), Antwerp (Belgium), Lucca (Italy). The Ljubljana urban region, represented by the RRA LUR will be participation as a follower region in the SUMP-PLUS project, in addition to 17 other European cities / regions. Our task will be to get to know and monitor six city labs and their pilot activities. RRA LUR will also be able to participate in knowledge exchange programme.

After the introductory presentation of the project and city labs, the follower cities / regions were given the opportunity to share their wishes and expectations during the project, and the knowledge that we want to receive and exchange with city labs. With a set of ideas and proposals, the lead partner will prepare a work program in which the following cities / regions will be included.

During the implementation of the project, several meetings will be organized, which you will be able to read more about in the following posts. You are kindly invited to read more information about the SUMP-PLUS project and its activities here.