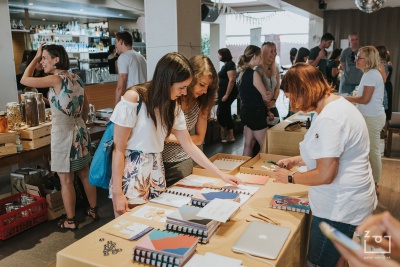 In February 2019 the Regional Development Agency of the Ljubljana Urban Region (RRA LUR) commenced the pilot implementation of the first part of a new support scheme designed to promote diversity in co-working spaces. This pilot phase ran until July. The purpose of the “Urban Diversity Creative Voucher” is to promote diversity in co-working spaces by connecting Slovene creatives with creatives from other countries who are currently living in Slovenia. The Creative Voucher is designed to encourage the development of the business ideas of creatives (both domestic and foreign) and at the same time enable co-working spaces to develop and support their activities.

The five co-working spaces included in the “Urban Diversity Creative Voucher” scheme ran a six-month programme for eight selected young entrepreneurs, who developed their own business ideas under the guidance of mentors and at the same time were able to make use of free office space. In this way foreign entrepreneurs were given the opportunity to integrate more easily into the Slovene (business) environment, form connections with other entrepreneurs and familiarise themselves with the Slovene market. At the same time the co-working spaces themselves were enriched by events/seminars/workshops/round-tables and numerous connections with the international environment. The following co-working spaces took part in the programme: ABC Accelerator, GIG Coworking, KIKštarter Center z.b.o., Mladi Podjetnik so.p. and Poligon Kreativni Center.

Implementation of the second part of the “Urban Diversity Creative Voucher” began on 1 September 2019 in two co-working spaces – Poligon Kreativni Center and Socialna Akademija – with a six-month programme for two young female entrepreneurs from outside Slovenia.

For more information about co-working spaces see the website http://www.urbandiversity.eu/sl/places-category/lokacija-coworking-sl/