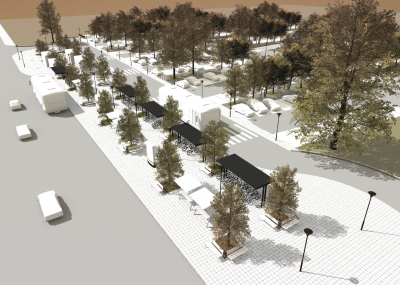 The Chamber of Architecture and Spatial Planning of Slovenia (ZAPS) annually awards the Golden Pencil commendation for major achievements in the fields of architecture, landscape architecture, and spatial planning. The purpose of awarding these professional commendations is primarily promoting quality architecture and arrangements of public spaces to the general public as well as raising awareness about the cultural and creative dimensions of design and spatial planning. The commendations are given to projects that make a contribution to the quality of the local built environment.

In 2015, the Golden Pencil commendation in the field of spatial planning was received for “The Study on P+R Sites” which was produced for the Regional Development Agency of the Ljubljana Region, as the contracting entity by the Urban Planning Institute of Ljubljana d.d. and IPOP with the Maja Farol group and Karolina Jankovič as the head of design project management.

The Network of P+R Scheme Collection Points in the LUR project, which includes “The Study on P+R Sites”, was one of the agency’s major projects in the 2007–2013 programming period. Its implementation has already been realised by some of the newly built P+R collection points

The panel recognised the project as a quality upgrade of established and well-accepted practices in urban planning, especially in terms of transferring innovative planning methods to the areas in which they have not yet been applied, and reviving older urban design practices.

“The Study on the P+R Sites” project shows the basic structure for setting up the regional network of transfer points of the public passenger transport in the Ljubljana Urban Region and signifies a solidification of proposals contained in older investigations and studies in the field under discussion. With regard to the increasing number of private vehicles on the roads and the persistence of unsustainable modes of traffic in the region and the unsustainable living patterns of daily commuters, the project designed to provide public benefit is of great importance.