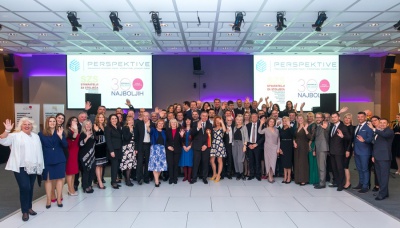 On 24 March 2019 the Regional Development Agency of the Ljubljana Urban Region was presented with a prestigious “Creating for Centuries” award by the Perspektive International Economy Forum at the 6th “Top 300” Regional Summit of Entrepreneurs of Central and South-Eastern Europe, held in Dubrovnik, in recognition of its contribution to stimulating the economy.

The principal aim of the “Top 300” Regional Summit of Entrepreneurs of Central and South-Eastern Europe is to promote entrepreneurship and notable entrepreneurial achievements, and of course to reward the best examples of good practices in this field. This was the sixth time that the prestigious “Creating for Centuries” awards have been conferred in Dubrovnik. RRA LUR received the award for its contribution to the promotion of entrepreneurship and for stimulating the development of ideas, innovations and investments in entrepreneurship via the Regional Creative Economy Centre (RCKE).

The RCKE helps develop the creative economy through training/education, consultations and events, via which it trains creatives to be successful businesspeople and promotes the potentials of creatives in the business enterprise sector while at the same time encouraging interdisciplinarity in the development of new products and services. The RCKE supports so-called bottom-up initiatives and helps establish complex business chains linking together creatives, enterprises, educational institutions and decision-makers, in this way promoting the development of new products and services that confirm the potential of interdisciplinary development processes in practice.

The independent international panel responsible for conferring the “Creating for Centuries” awards is made up of experts in economics, marketing, management, finance and entrepreneurship from nine European countries.