Brumen Award 2013: Application A to B 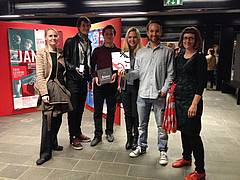 In October 2013, the mobile application called “A to B: LJ”, submitted by the Regional Development Agency of the Ljubljana Urban Region, received the Grand Brumen Award in the “Web and mobile applications” category at the Biennial of Slovene Visual Communications. It is a first application offering choice in a single place among three modes of sustainable travel around Ljubljana: bicycle (BicikeLJ), bus (Ljubljana Passenger Transport), and walking.

The design solution came about at a service and information design creative camp called “Creating an agenda or how to avoid solving problems which are not problems” organised by the Regional Development Agency and the Pekinpah Association within the framework of the CCAlps European project. Based on favourable responses from experts and the lay public, the Regional Centre for Creative Economy decided to develop a new mobile application. The top-notch Guerilla Code Mac/iOS app development studio (Matej Bukovinski and Luka Penger) was invited to build the application while the excellent app’s design was made by Sebastian Žetko, a visual communications design undergraduate from the Academy of Fine Arts and Design.

The purpose of the Biennial is establishing criteria of excellence in the field of visual communications design, encouraging their quality growth and promotion and elevating the visual culture. The international panel was chaired by Roger Black, a renowned American graphic designer who, among other things, has collaborated with the Rolling Stone magazine, The Los Angeles Times newspaper, the Bloomberg.com web portal and also prepared the re-design of publications such as Newsweek, Esquire and Reader’s Digest. The panel justified its decision on the winner in Category 18 with the following words: “It is an excellently designed and smart application for mobile devices which is not merely a nice package – it is an application in the true sense of the word. The application is based on standard maps and interactively leads the user around the city. Moreover, it contains live public transport timetables enabling interactive search of routes including the rent-a-bike service. The application’s design is clear and very helpful”.